What I was hoping for:  A Nordstrom that has more designer collections, both apparel and shoes, than South Coast Plaza.
What I got: A Nordstrom with NO designer apparel collections (St. John does not count), a couple of good shoe collections, and a very large and well-stocked contemporary section.

I was really expecting Nordstrom to come into Fashion Island in Newport Beach with the intention of kicking the ass of Neiman Marcus.  It was so not like that at all. They have decided to cater to the SoCal beach audience whose uniform is jeans and tees. How disappointing.

What was not disappointing was seeing that they stocked Nicholas Kirkwood and Jonathan Kelsey shoes.  These are shoes that you see in the multi-page Nordstrom ads, where they mostly show collections that they don't carry in Southern California.

The most exciting part of my visit:  Meeting Jonathan Kelsey.  As I was pawing his shoes, it didn't even register that there was a sign on the table saying he was in the store that day. I just thought he was an odd guy hanging out by the women's shoes. Then, he said "hello." I responded "hi." He then said, "those shoes are from the fall collection, so they aren't available yet, but the ones on the other end are available." I said, "oh, do you represent the line?" and he said "I design the line." How embarrassing! Though more embarrassing was what little fanfare Nordstrom gave the guy. He literally was standing next to his shoe display like he worked there!

I asked him what I have to do to find the awesome shoes typically featured in magazines. He confirmed my suspicion that you have to pre-order at trunk shows after the runway shows. I told him I had been desperately searching for a pair of Proenzas and he said his friend designs the shoe line. And I asked him where I should go shoe shopping in London and he said Selfridges has absolutely the best collection of shoes. All that and he was really adorable, too! 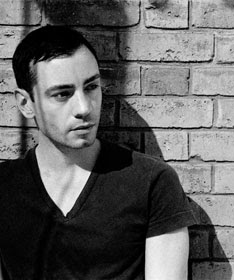