Even though I totally dissed the Zac Posen for Target collection a while ago, did that stop me from going to Target the weekend it debuted?  Important thing to note: The stores don't seem to care about their own street dates, and will put out these collections on the Friday or Saturday before they officially go on sale.  I truly believe this is why I did not find the Cynthia Vincent shoes I wanted on the Sunday they "debuted."  They had already been picked over for two whole days!

Regardless, I was in Target on a Friday for some manufactured reason, and walked through to see if anything was displayed yet, and of course, there it was! As suspected, most of the items were designed for juniors, and some of the items were as ugly as the pictures I had seen. But there were a few cute items, and typical me, I bought probably around 6 or 7 things.  In the end, I am left with 3 items. A long party dress which I will wear to the one fancy cocktail party I go to every year, a casual sun dress (the only one that was age-appropriate in length, definitely not as short as the picture below) and a black short tuxedo-like blazer.  I think I'm getting much better at self-control! 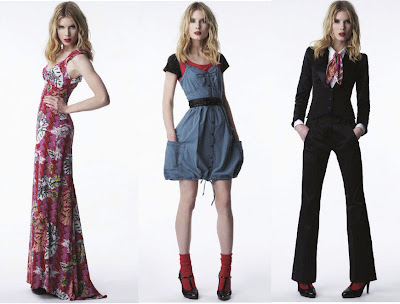 Not even rain could diminish my excitement at the chance of shopping in London early in May.  I even took the train from France just so I could visit my beloved Selfridges for a couple of hours. Well, not totally true, I took the train to London because I haven't been there in too many years nor have I seen my lovely friend Jen in that many years, and France was as close as I was going to get on a business trip.  So it was definitely worth taking the train to see Jen and her gorgeous family, and making a quick detour on the way to shop!

I so wish that department stores in the US were more like London.  Just imagine if Barneys, Dean & Deluca, Design Within Reach, and at least 2 of your favorite restaurants were all in one building. That's my idea of an amusement park. Entertainment for hours and hours.

Even with the limited time, I managed to do enough damage considering the exchange rate.  I bought 2 pairs of shoes (making it challenging to repack my suitcase at the end of the trip), a dress and a cashmere tee.  The shoes were the phenomenal Jil Sander heels I mentioned previously, and a pair of super-high turquoise suede Miu Miu sandals. I have not seen the Miu Miu's in the stores here in the states, nor have I seen the Jil Sanders except for on the Jil Sander online store.  The dress is from Preen and is an abstract black and white print with neon yellow trim, kind of reminds of old-school Body Glove surfwear, very eighties. David Pava initially thought I looked like a clown, then decided he liked it. Not sure what that says.  And the red cashmere tee is from Zadig and Voltaire, which is also challenging to find in the states, though I think they are opening a boutique in NY this year.  Anyway, I bought it because it had these tiny, nonfunctional buttons at the collar that were the shape of skulls!

What I didn't manage to do is any shopping in Paris. I went to one department store, thought about buying some Tsumori Chisato stuff, but was kind of too tired to deal with the language barrier. Plus the French have this thing about not really caring about making money, which kind of annoys me. The stores all close really early, taxi drivers will refuse you to take you places, etc.

Yippee! What a great shopping expedition to tide me over until the Marni sale this summer!  If I can find some pics of the other items I bought I'll be sure to post.

When did I become so vain?

"You're just now realizing this, Alison?"  Yes, I can hear you all saying this, but I still refuse to believe. What I want to know is why NO ONE has commented, good or bad, on the most amazing pair of shoes that I am wearing today.  I've made plenty of trips up and down the hall at work, went to Barney's at lunch, nothing. Doesn't anyone want to shower me with compliments? These shoes deserve it, don't you think? Or is it the fact that they blend into the color of my pale skin that no one can actually see them? I'm going to assume that's the case, otherwise, shopping will no longer be fun if I can't impress people with my wardrobe. 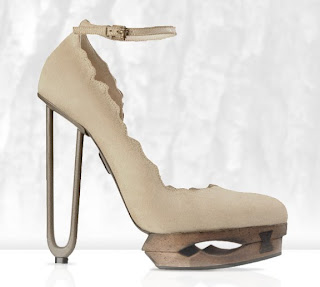